The Heads of Workplace Safety Authorities (HWSA) Imported Materials with Asbestos Working Group have issued a safety alert regarding asbestos found in acetylene cylinders that have been imported into Australia.

This safety alert provides information about acetylene cylinders with asbestos.

The asbestos identified through tests related to the internal insulation from the acetylene cylinders. The cylinders were supplied by Xinxiang Safety Cylinder Co Ltd in China and the material used was described as Calcium Silicate. The Australian company was advised by the China based supplier that the cylinders were asbestos-free.

Acetylene is a colourless gas which is widely used as a fuel and a chemical building block. It is the hottest of all fuel gases and is used for a number of applications including welding, plastics and acrylic acid derivatives and portable lighting. An acetylene cylinder has a different design from most other gas cylinders. It consists of a steel shell containing a porous mass, with the locations of possible asbestos being located at the neck and base of the cylinder. The acetylene gas in the cylinder is dissolved in acetone which is absorbed by the porous mass. Like other compressed industrial gases, acetylene can be hazardous to the user and for those nearby if not used correctly. 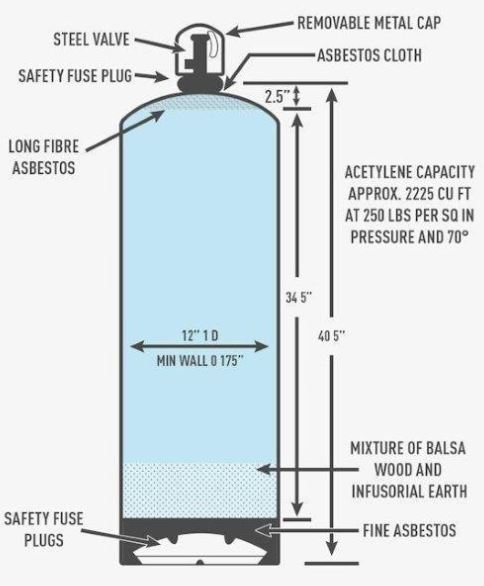 Managing the risk of asbestos in imported products

Local standards in some supplier countries may classify goods ‘asbestos-free’ where they meet a certain low level of asbestos content. In Australia, a product found with any level of asbestos is prohibited for import or use.

Available information indicates that these cylinders do not pose a measurable health risk through normal use.

Consumers should not perform any maintenance, repairs or modifications on these cylinders that may disturb the parts containing asbestos.

If you believe you have one of these cylinders then you should contact the supplier you received it from to arrange to have it returned. A safety data sheet on acetylene is available here.

Importers should be aware of the varying definitions and standards applied in the country of origin and/or supply. Australian regulations apply at the border.

Where acetylene cylinders are considered a risk of containing asbestos, the Australian Border Force will require assurances from the supplier that they do not contain asbestos. A test report from a National Association of Testing Authorities (NATA) accredited laboratory, or equivalent overseas body with a zero asbestos content result would be the best form of assurance. More information can be found on the NATA website. If adequate assurances are not provided, suppliers will face delays and be responsible for costs incurred when the cylinders are held at the border for the purposes of sampling and testing. Importers should be familiar with the asbestos information on the Australian Border Force asbestos webpage.

Find help in your state or territory

Search for a disposal facility near you